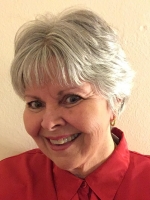 Donna was born in Gainesville, TX and grew up in Arlington, TX. She began her piano studies at the age of 7 and graduated from the University of Texas at Arlington in 1974, earning a Bachelor of Music in Piano Performance. During her college years, Donna was awarded accompanying and performance scholarships and performed solo concerts in both her junior and senior years. In her senior year, she was selected as the outstanding student of UTA’s Department of Music, was awarded first place in a piano competition, performing Chopin’s Ballade in G minor, and was listed in the national register, Who’s Who in American Colleges and Universities.

Throughout the years, Donna has served as a church pianist, for her Sunday School classes, and at many weddings. She has also performed as accompanist for choral groups and for vocalists and instrumentalists in performances and competitions. In 1975, she had the privilege of performing in Washington, D.C. at an international saxophone symposium where she accompanied soloists from Brussels, Belgium and the United States.

Donna enjoys composing music, recorded a CD of some of her songs in 2008 and is working on a forthcoming new CD.  In 2011, a fully orchestrated version of one of her compositions was recorded in Los Angeles.  It is posted on YouTube.

One of Donna’s favorite things to do is to travel, and her journeys have taken her to Austria, France, Belgium, the Netherlands, the Czech Republic and Portugal.

In past years, Donna has enjoyed providing music activities to children with emotional and learning disabilities, serving as a volunteer hospice visitor and working as a volunteer trainer and caretaker of injured animals at a wildlife refuge.

Donna currently teaches private piano students in their homes two days a week and is also a piano instructor at a local music store studio three days a week.  She loves to see her students grow in their musicianship and confidence.

Donna has a 35-year old son, Shane, who is a computer engineer at Intel.  Donna and Bailey, her rescue dog, enjoy their long walks together each day.

Donna feels very blessed in having the opportunity to serve as the 8:30 a.m. Service pianist at Spirit of Hope!